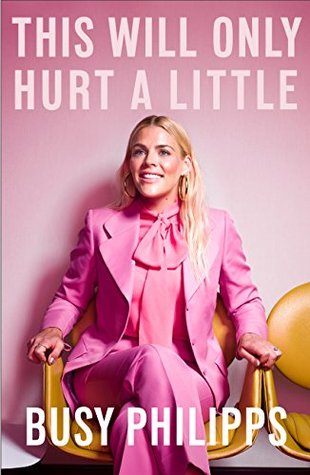 “I’m rolling my eyes right now, but that’s who I was. It’s who I am. I have a hard time just existing. I always think that if only I could be somewhere else, with someone else, doing something else, then I would be happy, finally. The hole would be filled. I know that’s not how life works. But it’s always been the thing that drives me.“

This Will Only Hurt a Little is the charming and candid memoir by Busy Philipps, the beloved B-list actress best remembered for supporting roles on Freaks and Geeks, Dawson’s Creek, ER, and Cougar Town, as well as in a variety of movies including White Chicks, Made of Honor, He’s Just Not That Into You, and most recently I Feel Pretty. I don’t feel like this is one of those celebrity memoirs where you really have to like the celebrity whose written it, because Philipps is a really strong writer whose stories of youth, growing up, and becoming an actress in Hollywood without a handbook will resonate with just about anyone who has grown up watching TV and movies and following even the vaguest details about the people who star in them.

The book follows Philipps’ life in a chronological fashion, from her upbringing in Arizona, to her storied teenage years (how many times can one girl dislocate her knee?), to her lifelong desire to be an actress and eventually attempting to fulfill that dream. While attending college, she began going to auditions regularly and was cast in a bit of commercial work before getting cast as Kim Kelly on the short-lived NBC teen drama Freaks and Geeks, which has since become a cult classic. One of the most interesting tidbits of her memoir comes into play here, when she describes her working relationship with James Franco (who played Daniel on Freaks and Geeks, whom Kim Kelly dated). She describes Franco as a typical male star on the brink of stardom who already thinks he’s the cat’s meow, and therefore acted pompous and arrogant around everyone on set. Philipps said it was clear he had respect for Linda Cardellini, who played lead character Lindsay, but merely because she had somehow proven herself worthy of respect simply by being the lead star and main character. She says he was never kind to her in any way; in fact quite the opposite. Philipps also describes one incident in particular where she was instructed by the director of the episode to push Franco while saying her line (“Dammit Daniel do something!”) and when she did, Franco allegedly grabbed her by her shirt, screamed in her face, and threw her to the ground. The producers were eventually notified and since Franco’s outburst had occurred during filming, they made him watch his reaction before apologizing to her. When he did apologize, Philipps could sense part of it was genuine (he said he just didn’t like how his character’s girlfriend is always pushing him around). She writes,

“And then he smiled and hugged me, and I don’t need to tell you this, but James is a fucking movie star. He was horrible to me, yes, but he’s also gorgeous and charming as hell. That’s where the manipulation lives. These dudes so often get away with their shitty behavior because they smile at you and stare into your eyes and for a second you’re totally transfixed and you just say, ‘Yeah. It’s okay. I get it. You were in the moment. I’m sorry I don’t understand. I’m sorry I’m not a better actor. I’m sorry I’m not a prettier girl. I’m sorry.’ And you accept their apology and somehow end up apologizing to them.”

I find this to be a very accurate description of what it’s like for any woman whose been raised with manners and class to accept an apology from a man, especially a man in a position of power (she even describes the set of Freaks and Geeks as a boys’ club, which is hardly surprising). Although while I do find this to be an important part of her memoir, Philipps almost immediately expressed disappointment with the “incessant” media coverage the passage about Franco received when her memoir was published last October, telling Andy Cohen on Watch What Happens Live that she was disappointed not only because it overshadowed the rest of her book but also because it put so much attention on a man’s story rather than on the woman who wrote that story. “It really bummed me out because I felt like, I’m a woman in this industry who wrote a very personal book about my experiences in life and in this industry,” she said, “and the headlines were all about a man. I was like, that was my point the whole time.” So I am going to respectfully leave it at that!

The book lost a bit of steam for me after the chapters about her teenage years and time on Freaks and Geeks and Dawson’s Creek, but there are still some other entertaining anecdotes from her later career including her time trying her best to pronounce medical terms correctly on ER and helping an ex-boyfriend come up for the idea for a movie that would later become Blades of Glory starring Will Ferrell…and being completely uncredited as a writer and shunned by the boyfriend (she has since received retroactive credit as a writer on the movie and was already more famous than that boyfriend ever was). She also talks about her time starring on the sitcom Cougar Town with Courteney Cox, and standing up to Steven Levitan, co-creator of Modern Family, who belittled her award when she received a Critics’ Choice Award for her role on the series. She ends the book with how she suddenly became the poster child for Instagram Stories, and how she finally discovered what she was meant to be all along: a talk show host, which came true right after her memoir was published – Phillips’ late-night talk show, Busy Tonight, premiered on E! last October. Overall, an entertaining celebrity memoir that will delight any fans of the beloved actress. 4/5 stars.