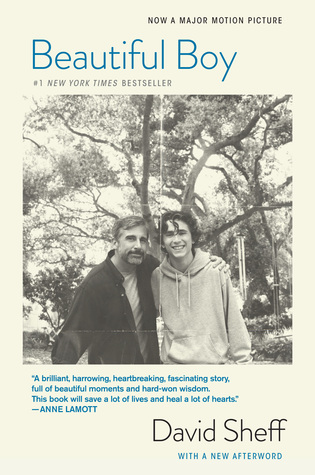 “Don’t confront me with my failures. I have not forgotten them.“

This was quite possibly the most exhausting book I’ve ever read. And given what it’s about, I’m surprised that I often found it so exhausting, depressing, and difficult to get through.

Beautiful Boy is journalist David Sheff’s memoir dealing with his son Nic’s drug addiction. But a lot of the book is much more than a straightforward memoir about a father struggling to save his drug-addicted son. Most strikingly, it’s a heart-rending testament to the unconditional and powerful love a parent has for a child. Many parts are particularly moving. It’s also extremely well written, and the author makes you feel as if you are going through the experience with him. That’s pretty much why it’s so depressing, because Sheff spares very few details about the psychological and emotional toll the struggle to save his son took on him, Nic, and their family.

The book also goes beyond a memoir of a father’s story about his son’s drug addiction. The story also brings about several philosophical and ideological questions regarding drug addiction, especially in regards to the idea that people from well-bred and stable families can also become drug addicts who live on the streets and will do anything for a fix. There is also a wide variety of research that Sheff includes about drug addiction and crystal meth, which was Nic’s primary addiction. But on another level, Beautiful Boy was also very frustrating, as Sheff can never seem to let go of his belief that something he did while raising his son caused Nic’s descent into drug addiction. Frustrating but understandable, since the inclination to blame yourself when your child suddenly becomes seemingly intent on destroying himself is a very common one. He and his wife eventually begin attending Al-Anon meetings where they learn the three C’s: “You didn’t cause it, you can’t control it, you can’t cure it.” Still easier said than done, when clearly a parent’s urge to blame themselves remains strong as they risk everything to save the child they no longer recognize. Another frustrating element was Sheff’s insistance on including anecdotes of his own very casual drug use when he was a teenager (all of which sounded like any teenager who tried weed or some drug once that scared them into never touching it again), which I’m guessing he thinks was partly to blame for his own son using drugs but frankly has nothing to do with his son’s addiction, but thanks for sharing, I guess.

One thing in particular that didn’t really ever seem to be solved for me while reading was what exactly drove Nic to start seeking out hard drugs. His father tells stories of how he started smoking marijuana as early as twelve and getting drunk as early as thirteen which were signs of concern for his parents, but still there was no real explanation – even throughout the many times Nic entered rehab – as to if there was any specific reason that drove a smart and inquisitive young man with a bright future to start using hard drugs and living on the streets. As the book went on I just figured that Nic suffered from addiction which is a disease, and could have been passed down genetically, or determined by a wide range of other factors. It was only in the epilogue and afterword portions of the book where Sheff writes an update to the story where everything comes into focus. Since Beautiful Boy was first published in 2008 and the story ends rather ambiguously in regards to Nic’s recovery, he had been asked numerous times over the years by other parents of addicts if Nic had survived and remained in recovery. He writes that Nic relapsed yet again in 2010 and when he returned to rehab, the facility in particular asked if he had ever been tested for any psychological disorders, which he had not. It turns out that Nic suffered from both bipolar and major depressive disorder which, if continually untreated, leads to repeated relapses in addicts. Perhaps if Nic’s depression and bipolar disorder had been treated much earlier, his addiction and descent into drug use might not have been so intense, and the numerous relapses wouldn’t have been so painful for all involved.

Overall, Beautiful Boy is an incredibly realistic portrait of the effects of drug use, particularly in regard to children and their parents. As I already mentioned, it’s also very well written and very moving, as a result. One passage in particular that stuck with me was when faced with Nic relapsing into drug use yet again, Sheff writes that he yearns for a procedure like the one performed in Eternal Sunshine of the Spotless Mind, where people have every trace of a traumatic relationship removed from their brain. He also often thinks that it might even be easier if Nic died, since he would at least know where he is. I also watched the film adaption of Beautiful Boy starring Steve Carell and Timothée Chalamet, which unfortunately leaves out a lot of important details and glorifies a lot of what actually happened. Still worth watching if you’re interested, but the book gives better insight into what really happens. Chalamet also gives a great performance as Nic. 4/5 stars.