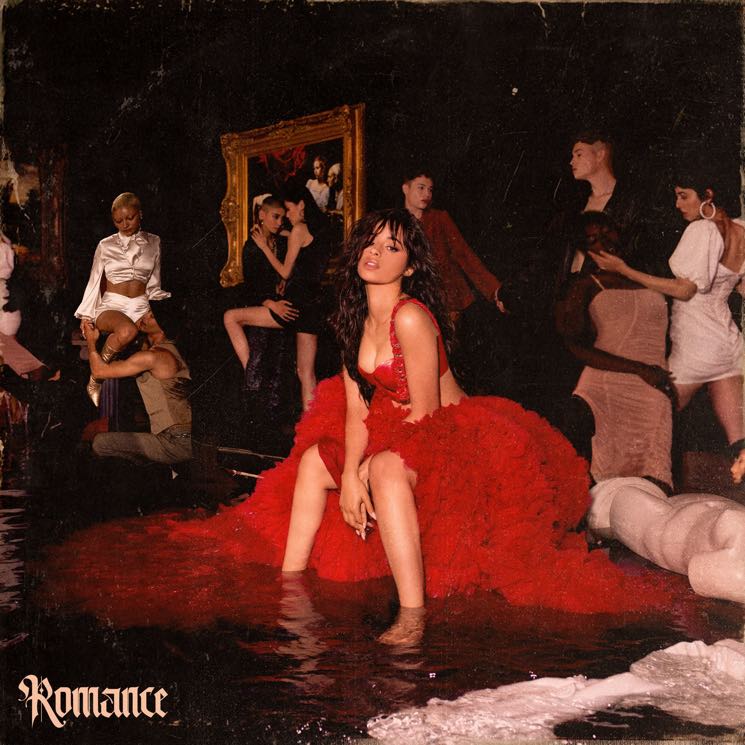 In case you haven’t already noticed (which means you’ve probably been living under a rock), Camila Cabello is in love. It’s been everywhere since the release of her steamy collaboration with Shawn Mendes from earlier this year, “Señorita,” which fueled real-life romance rumors just in time for the most memorable publicity stunt-turned-genuine relationship in recent memory (based on flirty performances at the VMAs and AMAs this year, I think the Internet has had just about enough of seeing “Shawmila” almost kiss). It would make sense then that Cabello’s second studio effort is titled Romance, and encapsulates a general theme of what it feels like to be in love. But I wouldn’t be fooled so easy into thinking her latest record is just a diary of I-luv-Shawn songs: the album is about love itself and one young woman’s experiences with it so far, capturing the highest highs and the lowest lows—sort of. “What I know for sure is,” spoke Cabello in a luminous teaser on Instagram for the album’s lead single in August, “falling in love with life itself makes an artist out of everyone.”

Cabello is one of many in the latest string of streaming-era pop stars to never be off the grid musically—it’s technically been almost two years since her debut solo album Camila at the beginning of 2018, but it doesn’t feel like it’s been that long. She dominated international pop charts for the remainder of the year before that with her Latin-infused breakout hit “Havana,” and she surprised audiences and critics alike with her impeccable songwriting ability and penchant for painfully emotional ballads when her first album arrived a few months later. Camila’s strength was that it was short—not too short as to lack cohesiveness, but just short enough to leave us hungry for more in terms of what else she can do. Romance is a few songs longer and while it doesn’t get the message across quite as quickly or effectively as Camila, Cabello’s second studio album is an exercise in emotions: when it comes to love, just how much can the human spirit take? According to Romance, quite a bit, and the moral of the story says that’s entirely the point.

The first half of Romance unfortunately spends a bit too much time chasing the chart success of “Havana.” When I first heard “Shameless,” one of the album’s lead singles, back in September, I was a bit worried that Cabello might be on the verge of—excuse the use of a term I hate—“selling out.” For what it’s worth, “Havana” is damn catchy, an expertly crafted pop song, and certainly a decade-defining hit. “Señorita” gets the same job done in a similar way, and while I’m not such a music snob (at least not anymore) to start placing shame on artists for doing what sells, Cabello was pretty much working overtime in that department this summer. It was certainly a departure from the latter half of the promotional period for Camila, considering follow-up singles “Never Be the Same” and “Consequences”—two exceptional and underrated songs—predictably did not see nearly as much success as “Havana.” This time around, Cabello is proving that she has the inescapably catchy hooks to mold with her own introspective lyrics to rightfully solidify herself in pop music: it doesn’t matter if I didn’t like “Shameless” at first, the melody didn’t leave my head for a week after. The same goes for “Living Proof,” a song which can only be described as the core of the album’s bop-meets-ballad vibe.

If anything, Romance’s fault lies in the fact that it’s too closely associated with its concept album formula: part of what made Cabello so dynamic, emotional, and fun on Camila was her ability to seamlessly transition from Latin-pop anthems like “Havana” or “She Loves Control” to the intense vulnerability of “Real Friends” or “Something’s Gotta Give.” The Cabello we get to experience on Romance is also emotional, which definitely reaffirms part of her charm, but the fact that she’s perpetually romantic on an album aptly titled Romance just feels, after awhile, a bit…boring. Maybe this is in part caused by the fact that we got to hear 90% of the album’s most interesting tracks before it was released: “Liar” continues her Latin-focused sound and energy while also building upon the eclectic Latin sounds we got to hear on Camila with “She Loves Control” and “Inside Out.” In other words, the song feels like a sequel to the sounds we were introduced to on her debut album, and is definitely a standout accomplishment. But the other songs that linger in the “Havana” success-chasing first half of the album, such as “My Oh My” or “Bad Kind of Butterflies,” don’t really offer as much as we know Cabello can deliver. She certainly does deliver, however, on the contagiously electric guitar-driven track “Cry for Me,” another standout moment from which the album could have benefited more by incorporating this kind of energy into its other attempts at anthemic dance-pop.

Romance hits its stride, however, on the second half of the album, where we are reacquainted with the introspective ballad maker we got to meet in part on Camila. “Dream of You,” which I can’t help but compare to the ‘90s classic by Selena, kicks off this particular highlight section of the album where the romantic Camila, the one that we’ve been trying to get to know in this latest collection of emotions, hits her stride. If the electric guitar on “Cry for Me” and trumpet solo on “Liar” were what the album needed to propel itself forward to this point, the powerful ballads “This Love” and “Used to This” are what Romance needs to make it feel like somewhat of a complete listening experience. These songs capture the heart of what the album is trying to sell: love, the human experience, and the inevitable messiness therein. Romance concludes with another heartfelt ballad, “First Man,” a candidly cute love letter from a daughter to her father.

Cabello’s second album certainly doesn’t take as many risks as her first, which is on the one hand disappointing. But on the other, Romance does offer a new chapter and layer of vulnerability and emotions from the Camila we’ve grown to know and love as a solo artist. You can tell that the passion, the vocals, and the experience, at least from the perspective of these songs, are there. The production definitely jumps out at you on more than one occasion (have I mentioned that I’m obsessed with the electric guitar on “Cry for Me”? Yes?) and the steamy, rebellious, and carefree parts of Cabello’s image that we first met on her earlier hits such as “Bad Things” still hold up (although will probably start to get old soon). In the meantime, let’s also embrace the carefree, romantic sides of ourselves and aspire to feel just as passionate as Cabello does about love.