by Jeffrey Davies
September 1, 2021 Filed under: 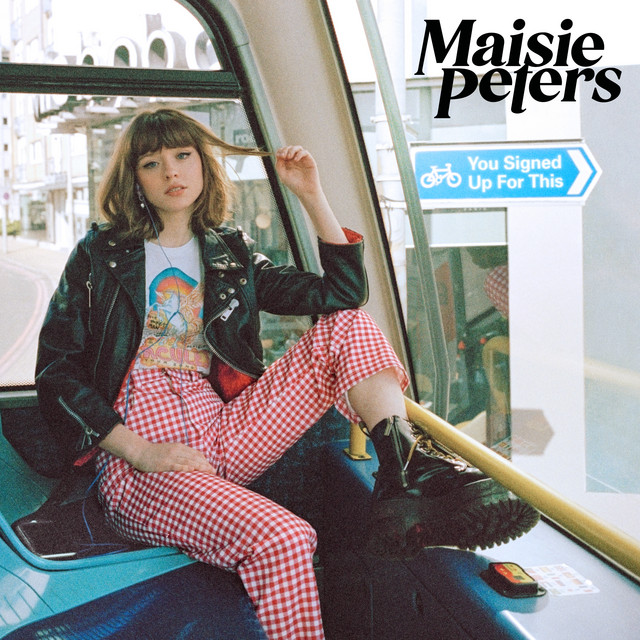 “This wasn’t how it’s supposed to go,” goes the opening lines of “John Hughes Movie,” the lead single from Maisie Peters’ first studio album You Signed Up For This. It’s a proclamation that ultimately becomes the general theme of the record, a stunningly heartfelt depiction of 21st century young adulthood. With a songwriting prowess comparable to that of Taylor Swift’s Speak Now or Alessia Cara’s The Pains of Growing, Peters creates a loveable, introspective journey into the chaotic emotions that often accompany the transition into early adulthood. She also displays a clear knack for the kind of hooks needed to make an inescapable pop earworm, something sorely lacking from an otherwise stagnant year for pop music.

“I am twenty and probably upset right now,” explains the singer on the title track. “Please don’t give up on me yet / I know I’ll get better, I’m just not better yet / Can you tell I’m trying, running out of breath / I know I’ll get better, I’m just not better yet.” Although it’s easy to view You Signed Up For This as an album about young heartache and attempting to be happy in your early twenties—as if one even knows what that means yet at that age—the record is in fact exploring the emotions typically associated with an introvert’s inability to understand why young is supposed to be fun. And even though one could easily view the twentysomething turmoil on display here as being heavily influenced by our year of solitude, You Signed Up For This is not a pandemic album. It’s a much-needed coming-of-age tale that just so happened to be released during the umpteenth phase of a never-ending crisis.

Fittingly, Peters grew up listening to voices like Taylor Swift, Lily Allen, and ABBA and began writing songs after borrowing a friend’s guitar, pretending to be other people. “I was 12, so obviously there was nothing interesting happening in my life. I did think everyone else was doing it, so I was surprised to find out they weren’t,” she explained in a recent interview. “At no point did I think I was going to be a pop star. I was just doing it because I wanted to. And anyway, I had no industry contacts – both my parents were teachers.” Like most self-taught musicians of her generation, Peters began a YouTube channel in 2015 where she released several original songs before signing with Atlantic Records two years later. Two equally introspective EPs, Dressed Too Nice For a Jacket and It’s Your Bed Babe, It’s Your Funeral, would follow.

Although most of Peters’ previous work fits within the pop genre, You Signed Up For This is surely her most pop-focused effort yet, foregoing some of the more immature folk influences present on her initial releases. Although the album does make copious use of synths and the aforementioned hooks, there are still enough acoustic, heart-wrenching ballads to make for the perfect sweater weather soundtrack. The record also happens to be the first release under Ed Sheeran’s label Gingerbread Man Records, with Sheeran lending his own songwriting talents to “Psycho,” “Boy,” and “Hollow.”

What makes the album compelling beyond its author’s self-examined talent is Peters’ confidence in sharing moments of young adulthood where she maybe felt anything but. If You Signed Up For This is a coming-of-age story, it’s one that is told with unapologetic sincerity to promise its listener that even in moments of unhappiness or anxiety, there is still always something worth celebrating. It’s a creative accomplishment that proves Peters knows what pop music is, at its core: a variety of highs and lows. “I didn’t have to bare-knuckle fight myself to write these songs and there was nothing dramatic about the recording process either,” she said. “I can combat any worries with the fact that I’ve made an album which I think is really good.”