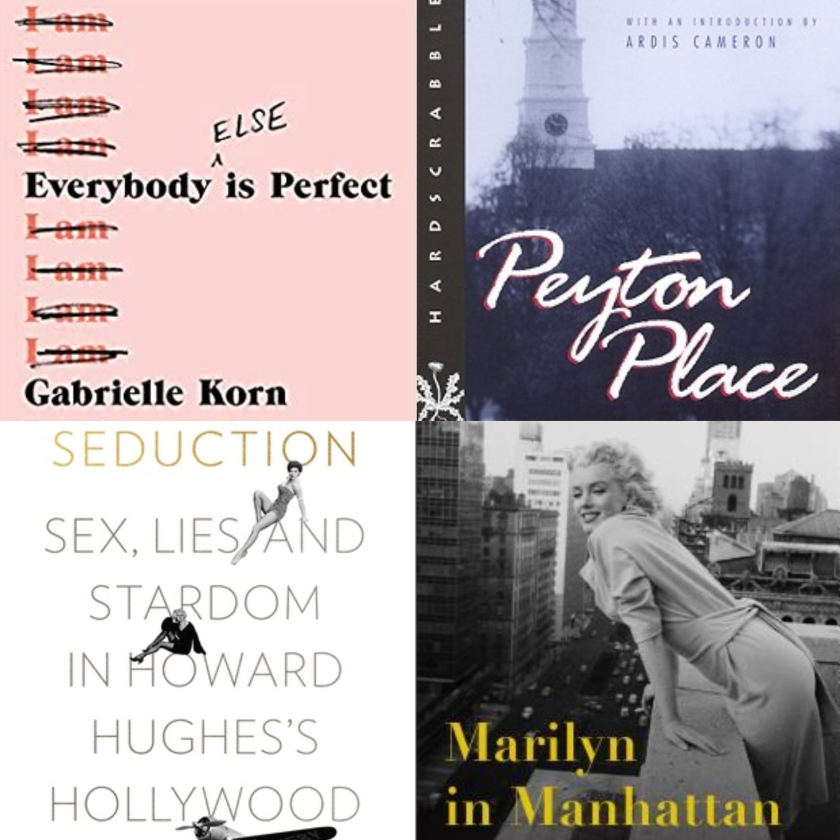 Hi hello and welcome back to The Best Books I Read This Season! We’re three months into 2021 and I am trying my hardest to not mention the elephant in the room™ in this sentence! This year is starting to feel a little more hopeful crisis-wise depending where you are looking and for that we can be grateful while also still following rules and guidelines because no one wants your germs, not now and not ever! The beginning of the winter season was a bit bleak where reading was concerned as my city entered another lockdown, so I dove into some previously owned unread books from the TBR pile that had been collecting dust.

February brought me the opportunity to re-enter my library for the first time in five months—during which I became Alan Harper from Two and a Half Men yelling, “Look at them! They’re mocking me!” while trying to find new reading material—but as it turns out, all of the titles that made this season’s list were books I bought for my own collection, since it seems as though I’ve bettered my skills at seeking out books I’m going to love in the last year. We all need something to spark joy, right? Read on for the best books I read this winter.

Peyton Place by Grace Metalious
First published in 1956, Peyton Place uncovers the passions, lies and cruelties that simmer beneath the surface of a postcard-perfect town. At the centre of the novel are three women, each with a secret to hide: Constance MacKenzie, the original desperate housewife; her daughter Allison, whose dreams are stifled by small-town small-mindedness; and Selena Cross, her gypsy-eyed friend from the wrong side of the tracks. Once denounced as wicked, sordid, cheap, and moral filth, the novel was the top read of its time and sold millions of copies worldwide. Long before Dallas, Falcon Crest, Knots Landing, Twin Peaks, or Desperate Housewives, there was Peyton Place. You should also check out this article I wrote for Book Riot all about the forgotten legacy of the twentieth-century bestseller and phenomenon.

Get Happy: The Life of Judy Garland by Gerald Clarke
Those close to me know that I’ve always loved Judy Garland (have I mentioned that I’m a homosexual™?), and she has resonated with me even more in young adulthood as I’ve faced my own struggles with depression and anxiety. I bought this biography, among those considered the best, after seeing the biopic Judy in 2019 and hadn’t yet found myself with the time or energy to devote to a lengthy biography…but then 2020 arrived! Here are her early years, during which her parents sowed the seeds of heartbreak and self-destruction that would plague her for decades, the golden age of Hollywood, brought into sharp focus with cinematic urgency, from the hidden private lives of the movie world’s biggest stars to the cold-eyed businessmen who controlled the machine, and a parade of brilliant and gifted men—lovers and artists, impresarios and crooks—who helped her reach so many creative pinnacles yet left her hopeless and alone after each seemingly inevitable fall. Here, then, is Judy Garland in all her magic and despair: the woman, the star, the legend, in a riveting saga of tragedy, resurrection, and genius.

Sex and the City and Us: How Four Single Women Changed the Way We Think, Live, and Love by Jennifer Keishin Armstrong
This is the story of how a columnist, two gay men, and a writers’ room full of women used their own poignant, hilarious, and humiliating stories to launch a cultural phenomenon. They endured shock, slut-shaming, and a slew of nasty reviews on their way to eventual—if still often begrudging—respect. The show wasn’t perfect, but it revolutionized television for women. Featuring exclusive new interviews with the cast and writers, including star Sarah Jessica Parker, creator Darren Star, executive producer Michael Patrick King, and author Candace Bushnell, Sex and the City and Us is both a critical and nostalgic behind-the-scenes look at a television series that changed the way women see themselves.

Everybody (Else) Is Perfect: How I Survived Hypocrisy, Beauty, Clicks, and Likes by Gabrielle Korn
Gabrielle Korn starts her professional life with all the right credentials. Prestigious college degree? Check. A loving, accepting family? Check. Instagram-worthy offices and a tight-knit group of friends? Check, check. Gabrielle’s life seems to reach the crescendo of perfect when she gets named the youngest editor-in-chief in the history of one of fashion’s most influential publications, Nylon. Suddenly she’s invited to the world’s most epic parties, comped beautiful clothes and shoes from trendy designers, and asked to weigh in on everything from gay rights to lip gloss on one of the most influential digital platforms. But behind the scenes, things are far from perfect. In fact, just a few months before landing her dream job, Gabrielle’s health and wellbeing are on the line, and her promotion to editor-in-chief becomes the ultimate test of strength. In this collection of inspirational and searing essays, Gabrielle reveals exactly what it’s truly like in the fashion world, trying to find love as a young lesbian in New York City, battling with anorexia, and trying not to lose herself in a mirage of women’s empowerment and Instagram perfection.

Too Much: How Victorian Constraints Still Bind Women Today by Rachel Vorona Cote
A weeping woman is a monster. So too is a fat woman, a horny woman, a woman shrieking with laughter. Women who are one or more of these things have heard, or perhaps simply intuited, that we are repugnantly excessive, that we have taken illicit liberties to feel or fuck or eat with abandon. After bellowing like a barn animal in orgasm, hoovering a plate of mashed potatoes, or spraying out spit in the heat of expostulation, we’ve flinched-ugh, that was so gross. I am so gross. On rare occasions, we might revel in our excess—belting out anthems with our friends over karaoke, perhaps—but in the company of less sympathetic souls, our uncertainty always returns. A woman who is Too Much is a woman who reacts to the world with ardent intensity is a woman familiar to lashes of shame and disapproval, from within as well as without. Too Much encourages women to reconsider the beauty of their excesses—emotional, physical, and spiritual. Rachel Vorona Cote braids cultural criticism, theory, and storytelling together in her exploration of how culture grinds away our bodies, souls, and sexualities, forcing us into smaller lives than we desire.

Seduction: Sex, Lies, and Stardom in Howard Hughes’s Hollywood by Karina Longworth
In this riveting popular history, the creator of You Must Remember This probes the inner workings of Hollywood’s glamorous golden age through the stories of some of the dozens of actresses pursued by Howard Hughes, to reveal how the millionaire mogul’s obsessions with sex, power and publicity trapped, abused, or benefitted women who dreamt of screen stardom. In recent years, the media has reported on scores of entertainment figures who used their power and money in Hollywood to sexually harass and coerce some of the most talented women in cinema and television. But as Karina Longworth reminds us, long before the Harvey Weinsteins there was Howard Hughes—the Texas millionaire, pilot, and filmmaker whose reputation as a cinematic provocateur was matched only by that as a prolific womanizer. Vivid, perceptive, timely, and ridiculously entertaining, Seduction is a landmark work that examines women, sex, and male power in Hollywood during its golden age—a legacy that endures nearly a century later. 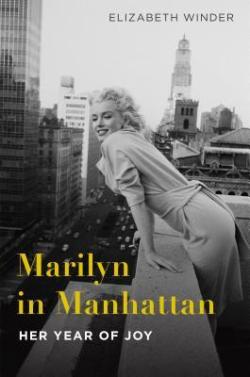 Marilyn in Manhattan: Her Year of Joy by Elizabeth Winder
In November 1954, a young woman dressed plainly in a white oxford, dark sunglasses, and a black pageboy wig boards a midnight flight from Los Angeles to New York. As the plane’s engines rev she breathes a sigh of relief, lights a cigarette and slips off her wig revealing a tangle of fluffy blonde curls. Marilyn Monroe was leaving Hollywood behind, and along with it a failed marriage and a frustrating career. She needed a break from the scrutiny and insanity of LA. She needed Manhattan. There, the most famous woman in the world can wander the streets unbothered, spend hours at the Met getting lost in art, and afternoons buried in the stacks of the Strand. Marilyn begins to live a life of the mind in New York; she dates Arthur Miller, dances with Truman Capote, and drinks with Carson McCullers. Even though she had never lived there before, in New York, Marilyn is home. In Marilyn in Manhattan, the iconic blonde bombshell is not only happy, but successful. She breaks her contract with Fox Studios to form her own production company, a groundbreaking move that makes her the highest paid actress in history and revolutionizes the entertainment industry. A true love letter to Marilyn, and a joyous portrait of a city bursting with life and art, this book is a lively look at two American treasures: New York and Marilyn Monroe, and sheds new light on one of our most enduring icons.

If we aren’t already, let’s be friends on Goodreads! What were the best books you read this winter?