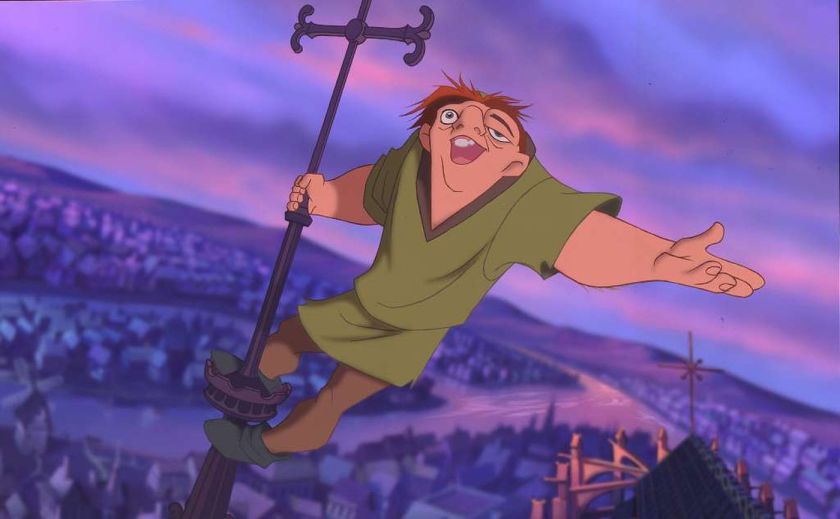 I color myself somewhat of a self-proclaimed Disney enthusiast, but there are a few movies that I’ve never seen. Being a 90s child, it could’ve just been that I didn’t own the ones I’ve never seen, or I never had any interest in them. In any event, I realized a few months ago that I’d never seen The Hunchback of Notre Dame; not only that, it was the only movie from the Renaissance Disney period that I’d never seen. So, I borrowed it from my aunt (Walt Disney Masterpiece Collection VHS copy, of course), and today, I was in the mood for a Disney flick, so I watched it. And I do have some thoughts that need expressing.

First of all, I was not aware or prepared for how dark The Hunchback of Notre Dame is, and after a Google search, I saw that it considered one of the darkest Disney animated features, so at least I’m not alone on that one. Up until the part where spectators in Notre Dame have tied ropes around Quasimodo and start throwing food at him while laughing where I wanted to shout, “This is BRUTAL!”, I think I only thought it was quite different and out-of-touch with other stories Disney has adapted, which wasn’t necessarily a bad thing. I was a bit taken aback by how it was just so apparent to everyone that the baby in the beginning (Quasimodo, the “Hunchback”), was hideous. I grew up in a world where Disney played with the emotions of children with themes that they could understand to a certain extent. So, to see a Disney cartoon where a child is deemed hideous and hidden away to ring bells in Notre Dame simply because he is deformed and perceived as unattractive, was quite a shock to me. I know; things like this have obviously happened in real life; much worse things have happened. I know how people throughout history have treated minority groups, no matter what they are. I’ve read The Diary of Anne Frank. I was just not prepared to see such a story handled in a Disney cartoon that came out 20 years ago.

I’m a little ambiguous to decide whether or not the fact that Disney chose to adapt such a story into an animated feature is a good thing. On the one hand, one could argue that The Hunchback of Notre Dame teaches people that beauty is not skin-deep and they can rise above people who mistreat them. In that regard, this movie reminds me of one of my all-time favorite Disney movies, Beauty and the Beast (I told you already, I’m a 90s child). The key difference between these two movies, however, is that Beauty and the Beast is adapted from a fairy tale in which a cocky prince has a spell placed on him so he can learn the value of treating people, no matter their appearance, with respect. He’s also a whimsical animal-like character who is shown to have a soft side and it’s all good after awhile and he transforms back into his beautiful, rugged self at the end. The Hunchback of Notre Dame is more real; it’s a man who is physically deformed and, in the 1800s, people obviously didn’t take nicely to that. People today still don’t necessarily take nice to that. Not only that, but the female lead of the movie, Esmeralda, a gypsy, is persecuted because Judge Frollo is bigoted towards gypsies and wants to rid Notre Dame of these “creatures”. This is when the movie lost me in terms of as a Disney that is somewhat geared towards children. If I had watched this as a child, I would not have known what a gypsy was, let alone why Frollo was so insistent on having her killed. Most children of a certain age, thankfully, don’t understand the concept of discrimination, so this would be absolutely foreign to them. Then Esmeralda breaks out into a song titled “God Help the Outcasts”, which is catchy of course, as it was composed by the genius minds that composed all the songs of Renaissance Disney, but I was just sitting there thinking, “This is so different from every Disney movie I’ve ever seen, ever. I would not have liked this as a kid, most probably because I would have for sure not have understood it.”

I did some research after watching it (I couldn’t just sit back and believe that this movie was commercially successful as all movies of its kind and time and that it received “largely positive reviews” as Google was telling me). I found out that some critics brought up the fact that some of its themes, including infanticide, damnation, sin and genocide, were not in fact appropriate for an audience geared, in part, towards children. There was also a study done on children in audiences shortly after the movie’s release, which found that kids were “unaffected” by The Hunchback of Notre Dame‘s mature themes and enjoyed it. You wanna know why they were “unaffected” by these mature themes? Because they would not have even understood them! What 6-year-old has a grasp on why the mean old white guy wants to kill the black gypsy just for being herself? I barely have a grasp on it as an adult, because it’s ridiculous. Even a legendary Disney feminist film like Mulan is easier for kids to grasp in that it’s obvious to anyone, even kids, that women do not have a huge part in the army, let alone in China. I watched Mulan as a kid and fully understood by the context that women were not allowed to join the army. That was that. Would I have understood why everyone was being so mean to Quasimodo just because he was “ugly”? I can guarantee you I would not, because I don’t really understand it now; why would you adapt a story with a theme like that and introduce it to kids? Yes, that’s the world we live in; pretty people are favored above all and maybe you can praise the movie for introducing that to a younger audience, but I do not think kids should have to concern themselves with that. They will grow up and learn it way too soon enough that the world is a harsh place to live, let them enjoy a Disney movie where they don’t have to see people tying up an ugly person and throwing food at him, all with laughter and smiles. Yes, Quasimodo gets revenge and Frollo dies in the end, but is he really all that liberated? I actually thought that The Hunchback of Notre Dame might not follow the typical heteronormative romance plot, but then Esmeralda gets with Phoebus, the brooding, handsome hero of the movie when they basically didn’t even know each other all that well. But hey, that was the only option for her, right? She couldn’t exactly get with Quasimodo, who clearly loved her, because he’s ugly! Her man has to be pretty and strong and handsome, with broad shoulders.

And so concludes my rant about watching The Hunchback of Notre Dame, most definitely the darkest Disney film in history, for the first time. I honestly do not recommend watching this with your kids. And you know something? Maybe there’s another reason I never saw this movie growing up: because someone told someone that I shouldn’t watch it. Thank you to whoever that was. I’m glad my childhood didn’t have The Hunchback of Notre Dame in it.