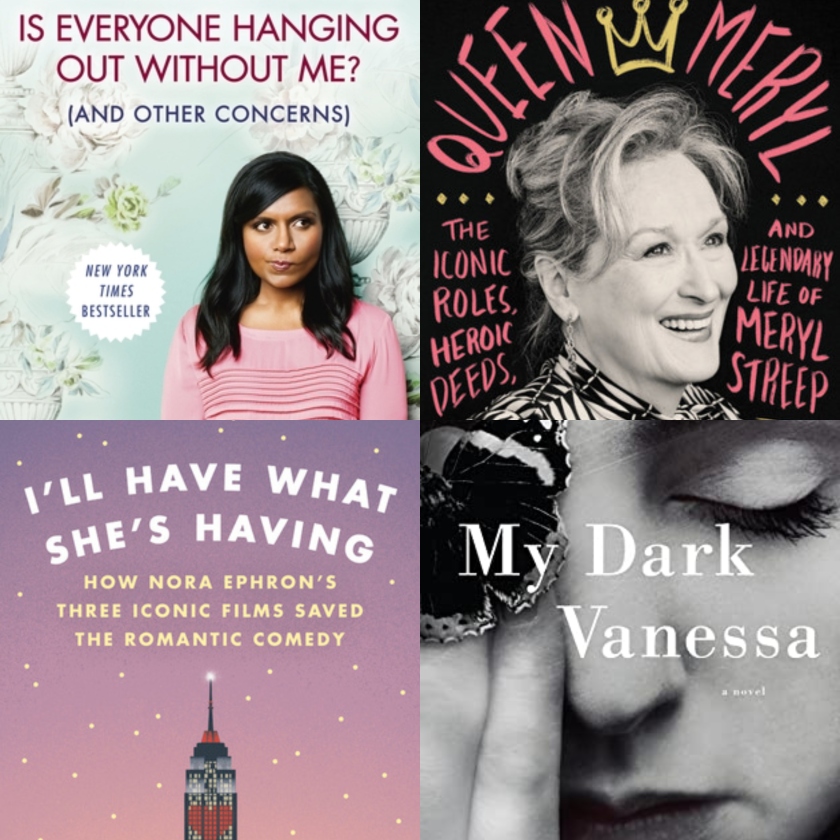 Welcome back to The Best Books I Read This Season! A lot has changed since the last installment of this segment. A global pandemic threw the world into an ongoing state of crisis, with almost everything closed, cancelled, or postponed for the foreseeable future. Where I live, which happens to still be a hotbed for COVID-19, we are just now starting to open up again—and it’s a little overwhelming, considering the risk of the virus is still very much present and I have no faith in the general public to not act like idiots. But like Fergie says, life goes on with or without you. So if you’re reading this, please remember that physical distancing isn’t over yet! Continue to stay away from others as much as possible, please! Lives quite literally depend on it.

I was tempted to title this roundup “The Best Books I Was Able to Get Through in Quarantine That Didn’t Fill Me With an Overwhelming Sense of Dread,” but, unfortunately, it was too long. It took me awhile to learn that this pandemic and crisis has affected every area of our lives, including our reading lives. (I haven’t been to the library since February. February.) I’m no longer ashamed to admit that I’ve given my credit card a good workout ordering new books online over the last few months, because if I can’t go to the library and I’ve read all the books that were sparking joy from my physical TBR pile, I deserve new books that are going to entertain me, dammit! In the words of Tara Schuster, buy yourself the fucking lilies! But you should only be seeing those books in my next roundup, since I did pretty well at reading unread books I own during the first few months of quarantine. Without further ado, these are the best books I read this spring. 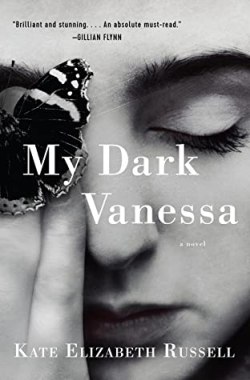 My Dark Vanessa by Kate Elizabeth Russell
This novel made quite the stir across the book community when it came out in mid-March, and since I knew that it would, I wanted to get my hands on it fairly quickly so that I wouldn’t be swayed by the opinions of others. In 2000, fifteen-year-old Vanessa Wye becomes entangled in an affair with Jacob Strane, her magnetic and guileful forty-two-year-old English teacher. Seventeen years later, amid the rising wave of allegations against powerful men, a reckoning is coming due. Strane has been accused of sexual abuse by a former student, who reaches out to Vanessa, and she suddenly finds herself facing an impossible choice: remain silent, firm in the belief that her teenage self willingly engaged in this relationship, or redefine herself and the events of her past. But how can Vanessa reject her first love, the man who fundamentally transformed her and has been a persistent presence in her life? Is it possible that the man she loved as a teenager—and who professed to worship only her—may be far different from what she has always believed? Admittedly, this was a pretty depressing pick to start reading right as the world started to come crashing down back in March, but I’m still glad I read it. Such an important and relevant story in the age of #MeToo. 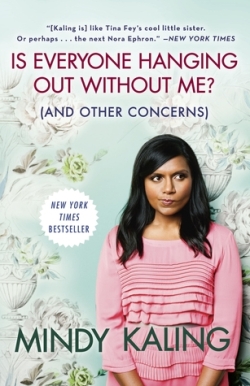 Is Everyone Hanging Out Without Me? and Other Concerns by Mindy Kaling
I was pretty late to the Mindy Kaling party. I’ve never been a fan of The Office, and for some reason which is still not clear, I was always under the impression that The Mindy Project was an Office spin-off, so I would be lost if I started watching it. Since Kaling began receiving prominent film roles in A Wrinkle in Time, Ocean’s 8, and Late Night, I decided I needed to get on the Mindy train once and for all. I started streaming The Mindy Project and immediately bought her two memoirs, Is Everyone Hanging Out Without Me? and Why Not Me?, both of which had come highly recommended from friends. While I understand the mixed reviews for Is Everyone Hanging Out Without Me? on Goodreads, it was a hilarious and entertaining celebrity memoir that kept me distracted as society started going to shit—so I gave it 5 stars. Why Not Me?, on the other hand, received much more positive reviews online, whereas I didn’t enjoy it as much.

Buy Yourself the F*cking Lilies by Tara Schuster
By the time she was in her late twenties, Tara Schuster was a sought-after TV executive who had worked with Jon Stewart and launched Key & Peele to viral superstardom. By all appearances, she had mastered being a grown-up. But beneath that veneer of success, she was a chronically anxious, self-medicating mess. No one knew that her road to adulthood had been paved with depression, anxiety, and shame, owing in large part to her minimally parented upbringing. She realized she’d hit rock bottom when she drunk-dialed her therapist pleading for help. Buy Yourself the F*cking Lilies is the story of Tara’s path to re-parenting herself and becoming a “ninja of self-love.” This is the book Tara wished someone had given her and it is the book many of us desperately need: a candid, funny, practical guide to growing up and learning to love yourself in a non-throw-up-in-your-mouth-it’s-so-cheesy way.

I knew from the moment I read the premise of Buy Yourself the F*cking Lilies that it was going to be very much my shit. But at the time that I bought and started reading it—a mere week before COVID was declared a global pandemic—I was in a terrible place mental health-wise, on track for a full-fledged nervous breakdown. I’m not someone who can read about anxiety when I’m feeling so anxious that I don’t know how to handle it, so I put it aside. A few weeks later, having calmed down a bit with some time to rest after everything shut down, I dove back in, and while I did find it a bit difficult to follow all of the author’s advice—since it’s a little hard to better yourself when 95% of the outside world is closed—I still loved it so very much. Definitely one of my favorites from this year so far. Highly recommend.

I Like to Watch: Arguing My Way Through the TV Revolution by Emily Nussbaum
Emily Nussbaum is a firm believer that we are what we watch. In I Like to Watch, she writes about her passion for television that began with stumbling upon Buffy the Vampire Slayer—a show that was so much more than it appeared—while she was a graduate student studying Victorian literature. What followed was a love affair with television, an education, and a fierce debate about whose work gets to be called “great” that led Nussbaum to a trailblazing career as a critic whose reviews said so much more about our culture than just what’s good on television. Through these pieces, she traces the evolution of female protagonists over the last decade, the complex role of sexual violence on TV, and what to do about art when the artist is revealed to be a monster. And she explores the links between the television antihero and the rise of Donald Trump. As someone with a lifelong passion for television, I really enjoyed this essay collection, which goes beyond merely observing and digs deeper into the further implications of loving TV. 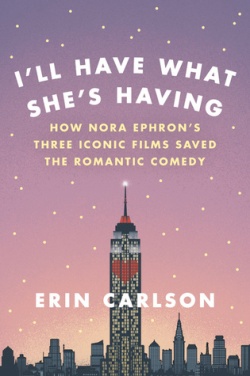 I’ll Have What She’s Having: How Nora Ephron’s Three Iconic Films Saved the Romantic Comedy by Erin Carlson
In I’ll Have What She’s Having, entertainment journalist Erin Carlson tells the story of the real Nora Ephron and how she reinvented the romcom through her trio of instant classics: When Harry Met Sally, Sleepless in Seattle, and You’ve Got Mail. With a cast of famous faces including Rob Reiner, Tom Hanks, Meg Ryan, and Billy Crystal, Carlson takes readers on a rollicking, revelatory trip to Ephron’s New York City, where reality took a backseat to romance and Ephron—who always knew what she wanted and how she wanted it—ruled the set with an attention to detail that made her actors feel safe but sometimes exasperated crew members. Along the way, Carlson examines how Ephron explored in the cinema answers to the questions that plagued her own romantic life and how she regained faith in love after one broken engagement and two failed marriages. Being pretty uneducated about Nora Ephron and her influence on the modern romantic comedy, I’ll Have What She’s Having was both informative and entertaining. 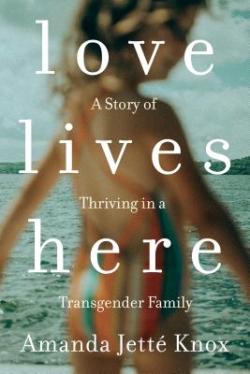 Love Lives Here: A Story of Thriving in a Transgender Family by Amanda Jetté Knox
All Amanda Jetté Knox ever wanted was to enjoy a stable life. She never knew her biological father, and while her mother and stepfather were loving parents, the situation was sometimes chaotic. At school, she was bullied mercilessly, and at the age of fourteen, she entered a counselling program for alcohol addiction and was successful. While still a teenager, she met the love of her life. They were wed at 20, and the first of three children followed shortly. Jetté Knox finally had the stability she craved—or so it seemed. Their middle child struggled with depression and avoided school. The author was unprepared when the child she knew as her son came out as transgender at the age of eleven. Shocked, but knowing how important it was to support her daughter, Jetté Knox became an ardent advocate for trans rights. But the story wasn’t over. For many years, the author had coped with her spouse’s moodiness, but that chronic unhappiness was taking a toll on their marriage. A little over a year after their child came out, her partner also came out as transgender. Knowing better than most what would lie ahead, Jetté Knox searched for positive examples of marriages surviving transition. When she found no role models, she determined that her family would become one. An incredibly moving and inspirational story about what it means to be a family. 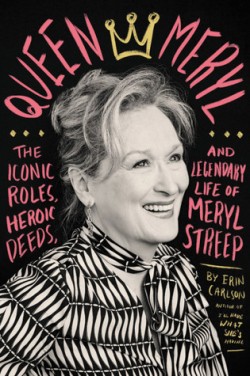 Queen Meryl: The Iconic Roles, Heroic Deeds, and Legendary Life of Meryl Streep by Erin Carlson & Justin Teodoro
After finishing I’ll Have What She’s Having, I knew I had to jump right into Erin Carlson’s latest book all hailing our lord and savior, Meryl Streep. A captivating and inspiring portrait of the legendary actress and her work, Queen Meryl explores the fearless icon’s trailblazing roles in film, her feminist activism, and the indelible mark she’s left on pop culture. Carlson documents all of Streep’s Oscars, accents, causes, memes, friendships, and feuds; also exploring the “off-brand” forays into action-adventure (The River Wild) and musicals (Mamma Mia!), and how Streep managed to sneak her feminism into each character. In the spirit of non-traditional bestsellers like Notorious RBG and The Tao of Bill Murray, Queen Meryl is illustrated by artist Justin Teodoro and filled with fascinating lists and sidebars. If you love Meryl Streep—which I’m assuming you do because otherwise we can’t be friends—I definitely recommend!