Well hello you, and welcome back to a new edition of The Best Books I Read This Season. Truth be told, I originally dreamed up this segment in a pre-pandemic reality, so I did not anticipate quite literally every edition this year being tainted by anecdotes about how shitty everything has been. But alas, this is where we are, and it still sucks. I hope everyone is surviving, because that’s all we can ask. As long as your coping mechanisms aren’t hurting you or someone else, cling to them and keep moving.

I’m pleased to share that I’ve just about survived my first of what looks like many university semesters delivered online. (I’ll tell ya how I’m doing, NOT WELL BITCH!) It hasn’t been easy at all, and I think there’s been somewhat of a collective understanding in the realms of online schooling and beyond that this is hard. For everyone. And what I’d personally love to see a few years from now is a bit more sympathy and understanding in regard to mental health struggles, because guess what? They don’t just exist during an ongoing global crisis. Among a million other things, this is an excellent opportunity to reclaim the conversation surrounding eliminating the stigma brought about by mental health. But I digress.

Attempting to stay good and distracted with books this year has started to have adverse effects, such as the fact that the inability to browse a bookstore or library really has changed a lot for this bookworm. But I’ve been trying to make my way through my ever-growing and ever-changing TBR list just like I always have, and as always, I did come across some memorable moments recently. Here are the best books I read this fall.

The Groom Will Keep His Name: And Other Vows I’ve Made About Race, Resistance, and Romance by Matt Ortile
When Matt Ortile moved from Manila to Las Vegas, the locals couldn’t pronounce his name. Harassed as a kid for his brown skin, accent, and femininity, he believed he could belong in America by marrying a white man and shedding his Filipino identity. This was the first myth he told himself. The Groom Will Keep His Name explores the various tales Ortile spun about what it means to be a Vassar Girl, an American Boy, and a Filipino immigrant in New York looking to build a home. As we meet and mate, we tell stories about ourselves, revealing not just who we are, but who we want to be. Ortile recounts the relationships and whateverships that pushed him to confront his notions of sex, power, and the model minority myth. Whether swiping on Grindr, analyzing DMs, or cruising steam rooms, Ortile brings us on his journey toward radical self-love with intelligence, wit, and his heart on his sleeve. 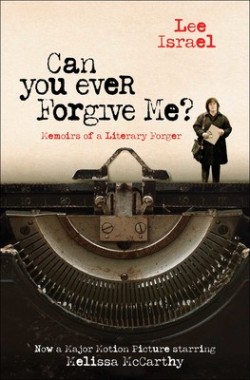 Can You Ever Forgive Me?: Memoirs of a Literary Forger by Lee Israel
I’m a huge fan of this memoir’s film adaptation starring Melissa McCarthy, and was pleased to find that the source material was just as painfully hilarious and relatable. Before turning to her life of crime—running a one-woman forgery business out of a phone booth in a Greenwich Village bar and even dodging the FBI—Lee Israel had a legitimate career as an author of biographies. Her first book on Tallulah Bankhead was a New York Times bestseller, and her second, on the late journalist and reporter Dorothy Kilgallen, made a splash in the headlines. But by 1990, almost broke and desperate to hang onto her Upper West Side studio, Lee made a bold and irreversible career change: inspired by a letter she’d once received from Katharine Hepburn, and armed with her considerable skills as a researcher and celebrity biographer, she began to forge letters in the voices of literary greats. Between 1990 and 1991, she wrote more than three hundred letters in the voices of, among others, Dorothy Parker, Louise Brooks, Edna Ferber, Lillian Hellman, and Noel Coward—and sold the forgeries to memorabilia and autograph dealers. Told with Israel’s trademark sense of humor, Can You Ever Forgive Me? always begs the question: could you blame her?

How to Write an Autobiographical Novel by Alexander Chee
How to Write an Autobiographical Novel is Alexander Chee’s manifesto on the entangling of life, literature, and politics, and how the lessons learned from a life spent reading and writing fiction have changed him. In these essays, he grows from student to teacher, reader to writer, and reckons with his identities as a son, a gay man, a Korean American, an artist, an activist, a lover, and a friend. He examines some of the most formative experiences of his life and the nation’s history, including his father’s death, the AIDS crisis, 9/11, the jobs that supported his writing—Tarot-reading, bookselling, cater-waiting for William F. Buckley—the writing of his first novel, Edinburgh, and the election of Donald Trump. By turns commanding, heartbreaking, and wry, How to Write an Autobiographical Novel asks questions about how we create ourselves in life and in art, and how to fight when our dearest truths are under attack. 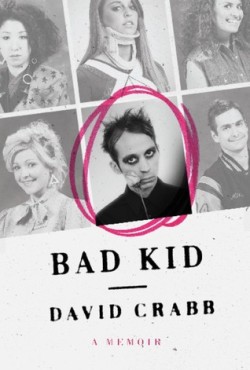 Bad Kid: A Memoir on Growing Up Goth & Gay in Texas by David Crabb
So this book completely wrecked me in the best possible way when I was not expecting that and I actually physically missed the characters when I finished it. A new all-time favorite. Somehow David Crabb had convinced himself that every guy preferred French-braiding his girlfriend’s hair to making out, and that the funny feelings he got watching Silver Spoons and Growing Pains had nothing to do with Ricky Schroeder or Kirk Cameron. But discovering George Michael’s Faith confirmed for David what every bully already knew: he was gay. Surviving high school, with its gym classes, locker rooms, and naked, glistening senior guys, would require impossible feats of denial. What saved him was finding a group of outlandish friends who reveled in being outsiders. David found himself enmeshed with misfits: wearing black, cutting class, staying out all night, drinking, tripping, chain-smoking, idolizing The Smiths, Pet Shop Boys, and Joy Division—and learning lessons about life and love along the way. Richly detailed with ‘80s pop culture and including personal photos throughout, Bad Kid is as laugh-out-loud funny as it is poignant. Crabb’s journey through adolescence captures the essence of every person’s struggle to understand his or her true self.

Can’t Even: How Millennials Became the Burnout Generation by Anne Helen Petersen
An incendiary examination of burnout in millennials—the cultural shifts that got us here, the pressures that sustain it, and the need for drastic change. Do you feel like your life is an endless to-do list? Do you find yourself mindlessly scrolling through Instagram because you’re too exhausted to pick up a book? Are you mired in debt, or feel like you work all the time, or feel pressure to take whatever gives you joy and turn it into a monetizable hustle? Welcome to burnout culture. While burnout may seem like the default setting for the modern era, in Can’t Even, BuzzFeed culture writer and former academic Anne Helen Petersen argues that burnout is a definitional condition for the millennial generation, born out of distrust in the institutions that have failed us, the unrealistic expectations of the modern workplace, and a sharp uptick in anxiety and hopelessness exacerbated by the constant pressure to “perform” our lives online. Utilizing a combination of sociohistorical framework, original interviews, and detailed analysis, Can’t Even offers a galvanizing, intimate, and ultimately redemptive look at the lives of this much-maligned generation, and will be required reading for both millennials and the parents and employers trying to understand them.

This is Just My Face: Try Not to Stare by Gabourey Sidibe
Gabourey Sidibe—“Gabby” to her legion of fans—skyrocketed to international fame in 2009 when she played the leading role in Lee Daniels’ acclaimed film Precious. In This is Just My Face, she shares a one-of-a-kind life story in a voice as fresh and challenging as many of the unique characters she’s played onscreen. With full-throttle honesty, Sidibe paints her Bed-Stuy/Harlem family life with a polygamous father and a gifted mother who supports her two children by singing in the subway. Sidibe tells the engrossing, inspiring story of her first job as a phone sex “talker.” And she shares her unconventional rise to fame as a movie star, alongside “a superstar cast of rich people who lived in mansions and had their own private islands and amazing careers while I lived in my mom’s apartment.” Sidibe’s memoir hits hard with self-knowing dispatches on friendship, depression, celebrity, haters, fashion, race, and weight. Irreverent, hilarious, and non-traditional, This Is Just My Face takes its place and fills a void on the shelf of writers from Mindy Kaling to David Sedaris to Lena Dunham.

If we aren’t already, let’s be friends on Goodreads! What were the best books you read this fall?