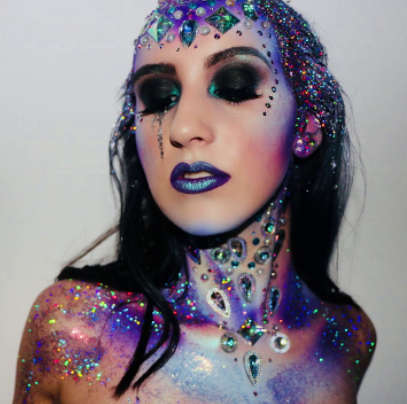 Scarlett Taylor is a pop vocalist and songwriter from Minneapolis, Minnesota that currently resides and works out of Los Angeles, California. Scarlett has a barrel house blues voice akin to soul singers of the ‘60s and rock divas of the ‘80s. Her music is a soulful dark mixture of electronic slow-core, pop, and rock. Sultry vocals, dynamic music, and thought-provoking lyrics create a surreal and dark experience that you must see live to completely appreciate.

I had the chance to speak with Scarlett for this week’s edition of 20 Questions where she told me all about her new music coming this year, what inspires her the most, why labels are restrictive, and more.

What is your earliest memory of wanting to be a musician?

As soon as I learned to write, I would write songs. I remember my first song I created sitting at the dinner table about macaroni and cheese. I would perform and dance wherever I went as a child. I literally have a drawing I made that says “I want to be a singer” that I drew when I was very young. I was born to sing and perform—and that was apparent very early on.

Which artists did you grow up listening to? Do they influence your work?

Absolutely, I listened to a little bit of everything. I always try to be versatile in my musical listening experience, especially as an artist. I remember hearing everything from Enya, Deftones, Nine Inch Nails, Amy Winehouse, Sia, and Evanescence, to name a few.

Who are your style icons?

I love runway fashion but I also take inspiration from the vintage era. I love wearing leather and boots, but some days I like to wear flowy dresses. I don’t like to subject myself to just one type of look/clothing, although I do usually learn towards black, leather, and boots. I really like street style as well, specifically Bella Hadid’s.

Which one of your new songs stands out to you the most and why?

My newest single that was released February 12th, “Black and Blue.” It’s pretty different from my other material in a really good way. I feel my listeners were pretty excited about it, as were me and my producer. Lyrically, vocally, and production-wise, I feel it’s one of my favorite products.

What would you say is your biggest strength in life?

My strength. I’ve been through a lot and always manage to work through it and come out on top. I’m also very independent, which I love about myself. Lastly, I’m a very sensitive and empathetic being—which can be both a blessing and a curse—but I’ve learned it’s actually both a gift and strength.

That’s a really tough question… I have so many and it would also depend on the genre since I listen to a multitude of music.

When are you the most inspired?

When I’m emotional or in a bad place. Most of my music is pretty raw and emotional, and I use music and writing as my “escape” and emotional outlet. It’s like using a diary except that diary is your voice and studio.

What inspired the songwriting process for your new single “Black and Blue”?

Film, life, fantasy. I’m big on action, crime, and drama. My producer and I both went into creating with the mindset that we wanted to keep my vibe, but also try something new. That’s where the 80’s synth-pop and vocals were born. I created both the melody/vocal composition and lyrics, while my producer flawlessly executed a beautiful and groovy soundscape. When I first heard the chords, something sparked within me and I just started writing like crazy. I probably wrote and came up with all the lyrics and melodies in fifteen to twenty minutes. “Black and Blue” tells the story of falling in love with a criminal—it can be interpreted as literally or figuratively. Literally, as somebody that is putting both themselves and you in danger from criminal activity, and figuratively as someone that “steals” your heart and makes you feel as though you have to be on guard of your emotions and heart at all times. It’s both dangerous and exciting at the same time. You’re living for the rush through this lover, and you’re walking the line to be with them. But you would do anything for them; including bailing them out when “I’m just down for the thrill of it all…your business doesn’t suit me I don’t wanna get involved.” It’s a destructive type of love that leaves your heart “black and blue.” It’s ride or die.

It seems I can never really finish a series… However, I was watching The Haunting of Blue Manor and American Horror Story. I also was watching Snowfall and finished a couple episodes of Narcos. My favorite series is probably Twin Peaks: The Return.

High-beam LED headlights and mean people or disrespect. Also, please don’t talk to me until I’ve had my morning iced latte.

One piece of advice you would give to your younger self?

Keep working, you’re going to get there. Don’t let anyone tell you what you can or can’t do. Love yourself.

Probably reincarnate Amy Winehouse so we could sing together the whole time, or The Weeknd.

Again, depends on the genre, but right now I’m digging anything on Trilogy (The Weeknd), “Tonight (Sundown)” by Aiwake, “F*ck with Myself” by Banks, and “Medicine” by Bag Raiders.

If you could pick one person in your life who has inspired you the most, who would it be and why?

Probably my grandma. She’s the strongest woman I know and I look up to her so much. She has taught me so much and always just wants the best for me. My grandma has been through a lot and is still the most beautiful and amazing person that always manages to smile no matter what happens.

The last book you finished?

The Power by Rhonda Byrne.

The most expensive thing you’ve ever shamelessly splurged on?

What kind of song is your favorite to write?

One of heartbreak or loss. I also like to write of hope, however.

I can’t narrow it down. My cat, music, good company, smoothies, and coffee.

What can we expect to hear next from you?

That information is under wraps, but let’s just say I won’t disappoint.