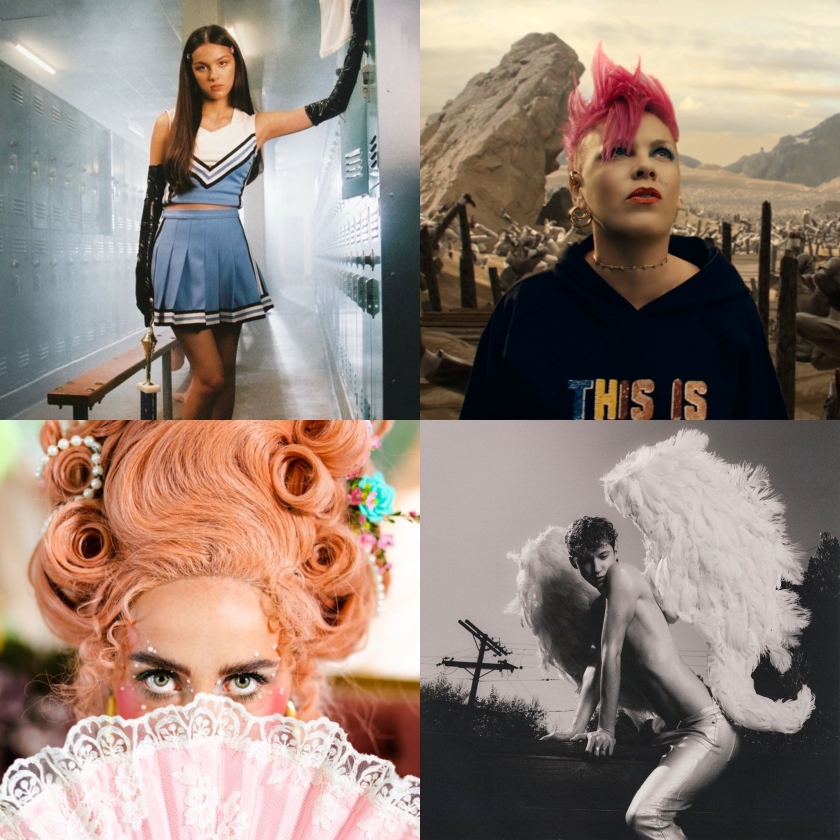 I’ve always liked using songs as a form of marking time—sometimes to my detriment, especially over the last two years—and this year especially has reminded me of the power of music to move through different headspaces. I start compiling my Best of the Year lists in January as soon as new releases start catching my attention, and by December I’m always amazed at how the list always manages to both take a different turn than I imagined and somehow chronicle my own life and emotions throughout. It’s what fuels my passion for music and reminds me to not be scared of my own thoughts and feelings, however messy they might be. In the immortal words of Alanis, the only way out is through.

From the rise of Ms. Rodrigo, to being high and feelin’ anxious inside a CVS, to Adele still being a child about things that happened when she was 25, these are my picks for the 50 best songs of 2021.

Took me a while to come around to the hype… but there is a quiet, inexplicable genius about this juggernaut—especially the “baaabe” on the bridge that I’m just utterly obsessed with.

Yay for the return of punk rock Avril! Still doesn’t excuse you all sleeping on her Head Above Water album, though.

The fact of the matter is that this is the song that should’ve hit number one the Hot 100… but most of you still aren’t ready for that conversation.

“I’m not alone though, my alter ego / Keeps me warm at night.” Our indie pop queen predicted lockdown turmoil all the way back in 2015 with this previously unreleased gem!

The absolute best pop song of the year, but another conversation we’re clearly still not ready for.

Dua Lipa says we’re good, so that means we are good. Don’t question it! Eyes on the horizon!

I reject Adam Levine’s intensely straight-white-man lyrics and his new trend of leaning in on the talent of young Black women but GODDAMNIT this man knows how to create a hook.

“Sacrifice your body to the rhythm of mine”? Honestly, at this point, sure.

Love me a good mental health anthem. Do call me if you need someone.

Okay, please give us the new album now, Olly.

“Dancing With the Devil” – Demi Lovato

Tag yourselves, I’m “twisted reality, hopeless insanity” on any given day.

“Never had my number but I’m mad he didn’t call me” is very me whenever any attractive man has the audacity to walk by me.

“You” – Regard, Troye Sivan & Tate McRae

Second best pop song of the year, hands down.

Apparently I should have trademarked the “Queen of Burning Bridges” before Bebe came out here and stole the title from me.

“Save Your Tears (Remix)” – The Weeknd & Ariana Grande

Studies show that when you add Ariana Grande to your song, the gays will appear in less than one business day.

Let me listen to this song and imagine an infinitely better sophomore Ben Platt album than the one he gave us.

If Jessie Ware decided to only make disco albums from here on out, I’d be fine with that.

Truly her best song in years.

She’s honestly an A+ performer, can’t even deny.

Strutting down the sidewalk to this? WHEW what a rush of pure homosexual energy.

Speaking of homosexual energy, 10s across the board!

No, wait, this was the ultimate rush of homosexual energy this year.

Why be a wallflower when you can be a Venus flytrap?

Liz Phair’s first album in 11 years was kind of boring, but there’s something so quietly calming and masterful about this song.

Where have you all been hiding FLETCHER all this time? More bops, please!

No more friends, indeed, I can barely keep up with the ones I have.

What I said earlier still applies… but their voices are so lovely together.

Maisie also knows how to write a hook. Watch out, fellas.

Another all around masterpiece.

I actually forget that this is Anne-Marie’s song every time because Little Mix absolutely steal the show.

I, too, have worn this dress for a little drama.

“You Signed Up For This” – Maisie Peters

You don’t even understand how much this song would’ve been my entire personality if released three or four years earlier. I mean, it’s still a fair amount of my personality now, but still.

So underrated. Their best song yet. More like this please.

We love a self-love bop.

Really? Being grown up kind of sucks? News to me.

Put on your best headphones and just immerse yourself.

Girl, we’re all in the middle of a breakdown. Get in line.

“Who’s In Your Head” – Jonas Brothers

When these boys want to, they can make one hell of a pop song.

The gayest disco collab we didn’t know we needed.

To quote Twitter, Adele singing “I was still a child” about things that happened when she was 25 is also very much me.

Yes, her best song in years. Another absolute masterpiece. But I’m still demanding you all go stream the Head Above Water album before you stream her new one.

“Message in a Bottle (From the Vault)” – Taylor Swift

The girls and gays were too busy crying over 10 minutes of “All Too Well” to recognize this star as the truly best song from Red (Taylor’s Version).

“They say to play hard, you work hard, find balance in the sacrifice / And yet I don’t know anybody who’s truly satisfied” yeah, it’s called internalized capitalism, babe.

Marina gave us the introvert hymn we deserve to close another year of (purposeful) social isolation. *peace fingers emoji*

Listen to these songs on my Best of 2021 playlist! Which were your favorite songs from this year?